Empire Universe III is the newest enhanced iteration of the franchise and takes players back up among the stars to a distant Galaxy where they will be able to once more raise and rule their own interstellar army. A free to play web based MMO the game focuses around building up resources to expand your planetary base of operations and then working towards fielding an impressive futuristic military force. What players choose to do with this force comes down to their own personal gameplay style, whether simply using it to defend their territory from the threats of the Universe, using them to assist in trade and diplomatic negotiations opening up peace talks with other players or simply using it as a weapon of destruction to bring your rivals to heel as a feared warmonger looking to make a name for themselves.

Players start by choosing the race that they wish to play as throughout the duration of the game, nine different races available each health their own strengths and weaknesses based on a variety of categories such as Navigation, Trading, Battle, Economy, Construction and Research, which equates to different skills that are available within the game. Each race has its own background and lore that gives players an idea of how these strengths and weaknesses play out, also whilst there is an ongoing rivalry for every player in the game to try and be the best there is further competition where players can see how they are performing in comparison to other players of the same race. From here players choose from a variety of commanders, predesigned skins that will show up as the players Avatar went interacting with other players in the game and finally their starting planet, which has no mechanical properties and simply shows what the planet looks like.

The fundamental gameplay aspect of Empire Universe III is a base building MMO where players will have two gain XP by completing various quests to unlock research nodes that will give them access to new buildings that they can construct. Once these buildings are laid down in their military base the player gains various properties, options and opens up new features. One of the key types of buildings that players will have to focus on resource production buildings to give them access to a wide variety of metals and minerals required for further construction, as well as building Shipyard buildings to construct naval vessels. Whether buildings or units all constructions will use up resources and take an amount of time to complete, anything from minutes to days.

Once a player has been playing for some time they will be able to field a large enough naval army where they can try to take over rival planets and engage with other players in PVP, which directly links to the rank leaderboard where players from all across the world compete against each other trying to reach the top spot or simply seeing which of their rivals is next in the pecking order that they can try to take down. 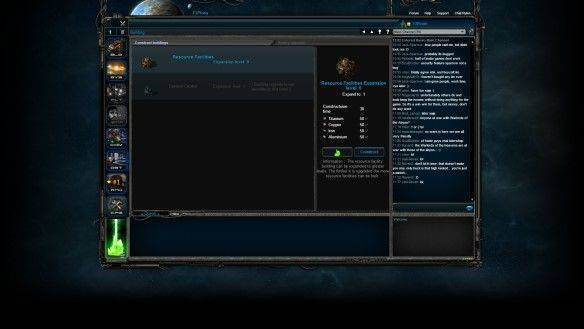