In this free to play Empire management MMO players choose from one of three different rival races in a war of galactic proportions, rule over your own planet and established your place within the Empire, make new friends, allies, rivals and ultimately enemies as you all battle for the ultimate goal of domination of the known universe. This futuristic space strategy game is set in the distant future where the AI robotic Terteths have broken free of their human owners from the Confederation in a devastating war. Out among the stars these two fight against each other along with a third alien race, the Noxis, whose way of life due to their poor environment consists of raiding other planets for their own survival.

Each race within the game has their own variation of the available buildings, defences and ships within the game, as well as a different graphical user interface to further enhance the feeling of playing as a different fraction. Each of these races has their own strengths and weaknesses; the Confederation have strong, heavy yet slower ships in comparison to the weaker but fast Noxis vessels, whereas the Terteths are all around more balanced and in some ways easier to players due to having no major weakness that can be exposed.

The overall game is broken up into various rounds which affect gameplay in many different ways. When attacking with your fleet the battle will last a certain amount of rounds, watching the results of each round to see how strong each force still appears to be giving. During battle a full diagnostic report is available showing things such as the date, time, actual attackers coordinates as well as defenders coordinates and the combat bonuses for both players. Battle points can be earned during combat, whether you win or lose which add to your overall score.

Resource management is another key area of the game and resources typically come from the suns power, using its energy to construct buildings and keep them running. At the beginning of each game the sun will be born and has a lifespan of anything from 225 to 355 days/rounds, slowly the Suns energy will deplete and depending on how old the sun is will determine its energy output, the older the sun the less energy it gives off. 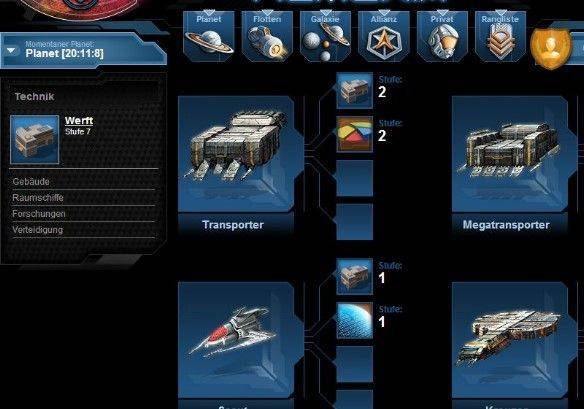