Take your place among the Federation or the Klingon Empire in Star Trek Online, a free to play MMORPG that lets you travel across the stars, seeking out new planets and civilisations and generally boldly going where no man has gone before. Thiss the game itself lives within the prime universe of the Star Trek franchise, the history and background of the first nine movies and the TV series cannon within the game, but a original storyline has been crafted for players to explore. Using the powerful Forge system players are able to create their own instanced based quests where they can lay down maps, items, NPCs and mission objectives creating a truly unique questing system.

Take on the role of the captain of your own ship and specialise as either an escort, science or cruiser ship, each with their own unique characteristics, strengths and weaknesses. The escort ship is well equipped for battle with both high defences and powerful fence it is a fast and deadly ship, but suffers at the quicker depletion of its crew. The Science ship is pure support, geared with the ability to heal friendly ships and use their scanners to detect hidden enemies and spot their weaknesses, for they are more vulnerable in direct combat than other ships. The cruiser is a flying juggernaut, larger than the other ship classes it has a larger defence rating and a number of key features that can keep its damage system is online in battle.

As well is choosing the type of ship you wish to specialise in, players are also able to customise and equip their ships with various cosmetic and functional upgrades, everything from structural changes, cosmetic paint jobs and items that will affect key systems such as engines and deflector shields. Not only this but the captain must be hands-on with their crew, particularly their bridge officers who are used to mount a number of different stations and are independently levelled up, the higher the level the more skills and options are available to the captain in battle.

Whilst is large part of the game is ship orientated players can also teleport down to planets surfaces with an away team or board enemy and friendly ships. The game offers two different types of combat depending on whether you are playing as your character (typical third person combat) or in your ship where combat becomes much more tactical and strategic and positioning yourself in battle as well as monitoring your ships systems becomes an integral part of combat. 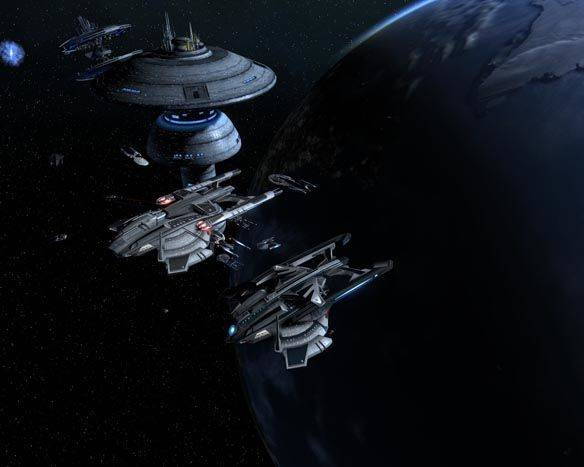