This free to play RTS MMO is set in a futuristic universe were a planet lies in ruin and this is your responsibility to once more restore civilisation, uncovering once lost knowledge, researching and developing new technology in the hopes of helping mankind survive that is now scattered over various colonies rising up into their own empires this. As resources deplete and territory is claimed all-out war is unavoidable between the independent sectors that make up the now shattered remains of the United World Empire. The game is client free and can be played directly in your favoured web browser.

Within the game there are three main resources that players will battle it out for: uranium, titanium and credits, each of which are needed to direct buildings, unlock new technologies and rise up and mighty army that is strong enough to defend their territories and crush their enemies. Titanium and new rhenium are earned per hour depending on the mines and resource producing buildings that have been built and upgraded, which is then stored in your available warehouses. Credits come in the form of a tax and gained from the populous; they are the primary resource is needed to maintain and support your army and once this pool dries up one by one your units will go AWOL.

Players will start their life in their own military base in their own private sector which the player will need to defend with their armies and technological defences. Armies can be built up from over 30 unique units which are split between defensive and offensive troops, and some unique units such as cyborgs that can perform both duties. By increasing technologies new units will become available as well as making it easier to maintain your current forces to ensure your war machine doesnt seize up.

Within the game players can find various artefacts, lost technologies that can advance and military units attributes and the players private sector sector in general. These artefacts can be found across the world discovered various locations dropped from enemies and can have both temporary or permanent effects. Other important discoveries can be found in the form of deposits which yield free resources, including artefacts, and can be discovered once a radar system has been developed and an Industrial Syndicate to recover them. 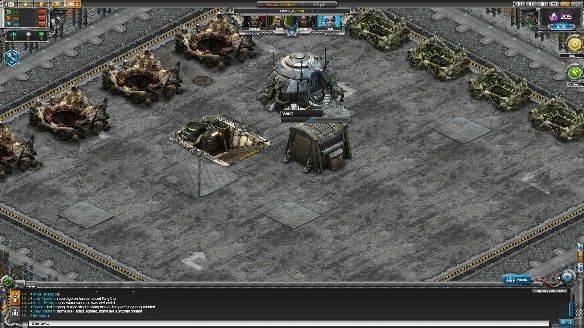